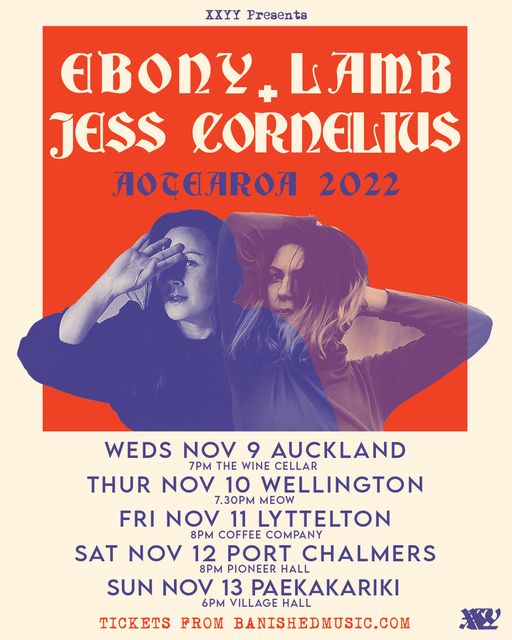 Ebony Lamb (the driving force behind Eb & Sparrow) and Jess Cornelius (NZ native, LA based, formerly Teeth & Tongue of Melbourne) are soaring out as a double headline across Aotearoa this November. Jess will be performing with Mikal Cronin (of Ty Segall’s Freedom Band) and Ebony will debut her new all-wahine band comprising of musicians Olivia Campion (Yumi Zouma) and Phoebe Johnson (Revulva).

Jess Cornelius is travelling from LA to tour her homeland of Aotearoa, fresh off the back of a US tour with King Gizzard and the Lizard Wizard. Her highly acclaimed album “Distance” was released in the throes of the pandemic, receiving  glowing reviews from the likes of Pitchfork, MOJO, the Guardian, Rolling Stone, and NPR. Jess released three critically acclaimed albums as Teeth & Tongue, receiving nominations for the Australian Music Prize and a J-Award. Jess has performed the world over playing alongside Courtney Barnett, Ty Segall, J. Mascis, Juana Molina and Laura Marling, as well as multiple international Music festivals.