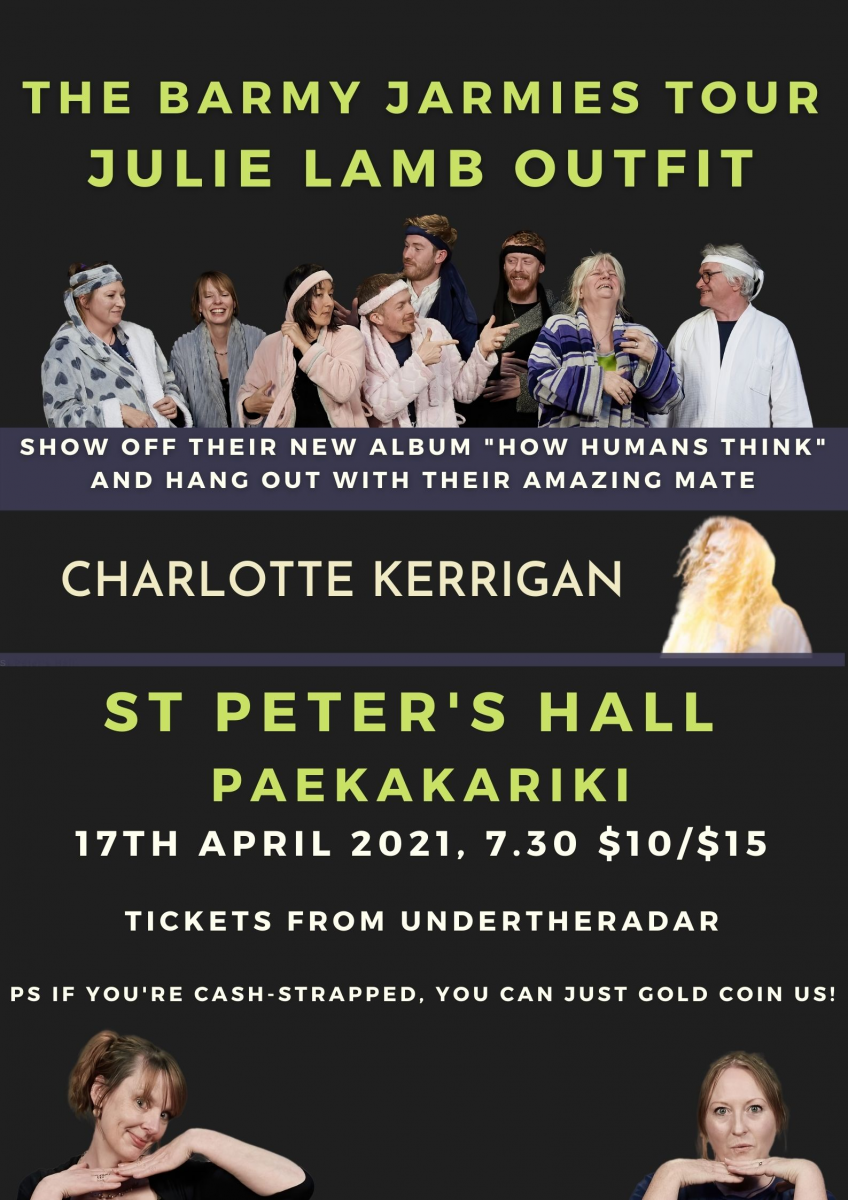 The Julie Lamb Outfit are bringing their full eight piece, kick-arse funky pop sound to St Peter’s Village Hall.
They’re showing off their 2020 album “How Humans Think” which debuted at 10 on the official NZ Album Charts, and received 5 stars from Muzic.net.nz. They are also celebrating the landmark of 5 studio albums and 50 original songs.

The wearing of jarmies may or may not happen, but is encouraged… always. Because let’s face it – we all love jarmies… hmmmm jarmies.

Come along. Get yourself lost between the stories and the groove and find yourself in a high energy smile-a-minute space.

ABOUT CHARLOTTE KERRIGAN:
Bluesy folk soul singer-songwriter Charlotte Kerrigan has been performing in Kapiti for over 15 years with both her original music and covers bands Bluesette and Retro Divas. Charlotte released her debut EP ‘Metaphor’ in 2017, recorded at Surgery Studios with Lee Prebble. The album entered in at #1 on the NZ Top 40 Heatseekers albums and #7 in NZ Albums Top 40.
The latest album ‘Paper Lanterns’ also recorded and mixed by Lee Prebble, and mastered by Mike Gibson of Munki Studios, was released 20 March 2020. A 5/5 star review from Muzic.net.nz describes the new album as a collection of soulful, bluesy ballads with melodious jazz influence, and weighty compassion in her lyrics.

ABOUT THE JULIE LAMB OUTFIT:

“Anyone who has seen the Wellington-based Julie Lamb Outfit live, knows they are as tightly woven as that machine knitted jumper your mum made for you in the 70s – and keep you feeling just as warm. CLAIRE SYMONDS, FREELANCE JOURNALIST

The Julie Lamb Outfit is an 8-piece collaborative music family coaxing kick-arse funky pop music into the multiverse.
This line up creates energising and personality filled music and the arrangements ensure each instrument has a chance to shine. Album reviewers and live audiences talk about how fabulous it is to be able to hear each instrument, how impressive that we leave space for each other, and how much fun we convey we’re having… which is infectious for them too.
Well, when you enjoy being with people, respect what they do, and laugh with them a lot – it shows on a gig. That easy.

Mischief, stories, sentiment, groove. Not always in that order.