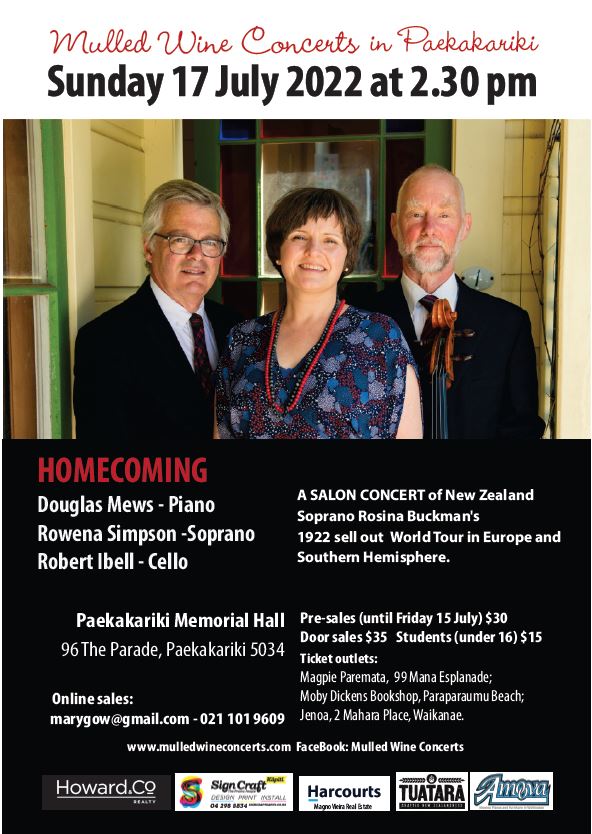 It is three years since Paekakariki’s Mulled Wine Concert series featured the “Hammers and Horsehair” duo of Robert Ibell (cello) and Douglas Mews (piano). Now they have joined forces with the well-known soprano Rowena Simpson and are due to make their return on Sunday 17 July at 2:30 PM. They will present a “Salon Concert” intended to give Kapiti audiences a taste of what famous Kiwi soprano Rosina Buckman’s tour would have sounded like a century ago.

New Zealand has a long history of classical music and this year, one hundred years will have passed since the singer – who in her day attracted audiences of ten thousand or more to concert halls around Europe – undertook an epic tour of the entire country to celebrate her return to the Southern Hemisphere. Rosina and her accompanists, Cellist Adelina Leon and pianist-composer Percy Kahn played 110 concerts in 1922 to enthusiastic audiences around Australia and New Zealand, most of which were sold out.

The 2022 programme is called “Homecoming” and will offer high-level music interspersed with funny and enchanting anecdotes from the 1922 Buckman tour comparing life on the road then and now – including some vignettes of Kāpiti life then. “We’re looking to create a special atmosphere,” says pianist Mews. “We will play a piece and chat to the audience as if we were playing in their sitting-room at home. People will be able to hear the music much as it would have been heard by audiences when it was performed a hundred years ago”.

On the musical side, the group will present some of the period music from the original tour, notably Arditi’s “Il Bacio” and a piece composed by Molly Carew for soprano and piano “Love’s a Merchant”. There will be an arrangement by Percy Kahn of “Ave Maria”, and other pieces for cello, piano and vocals. The group will also present some of their own favourites including Brahms’ “Intermezzo in B flat” and Offenbach’s “L’Etoile” scored for soprano, cello and piano.

A delightful and historic afternoon of music and history is in prospect and organiser Mary Gow is delighted to have this unusual and intriguing performance as part of her 2022 Mulled Wine concert series. The concert will take place in Paekakariki’s beautiful Memorial Hall on the seafront with its unrivaled views of Kāpiti Island and special acoustic qualities.