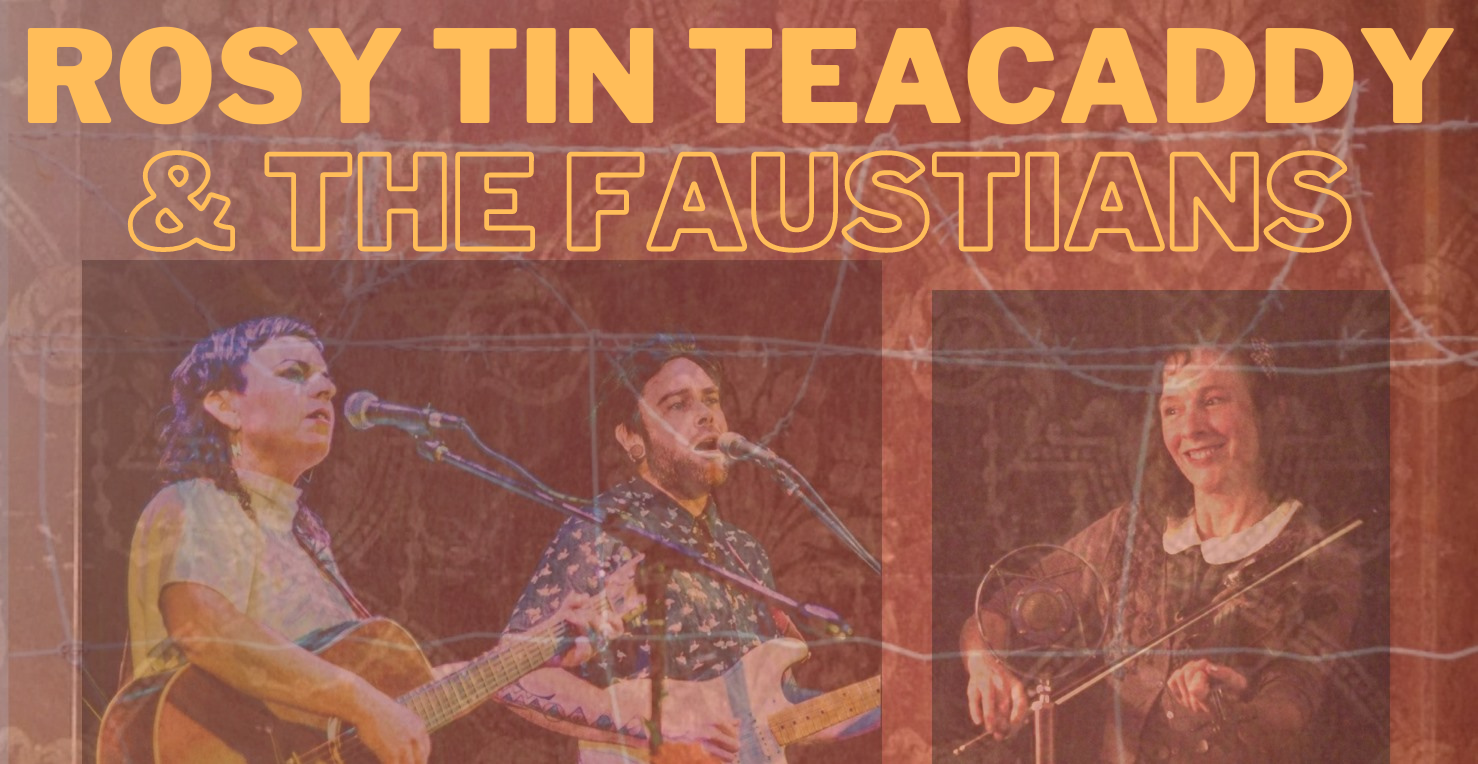 A rare afternoon concert of two bands – each in their own way with great affection for the strange things in life – the beauty and sadness of the human condition, and otherworldly sound scapes.
Rosy Tin Teacaddy
– are Holly Jane Ewens and Andy Hummel — an alt-folk duo from Paekākāriki who’ve built a reputation for being both cheeky and heartbreaking, with phrasing so tight you’d be hard pressed to fit a needle through it. Formed in 2007 and with four releases under their belt, the duo have appeared at numerous arts festivals and supported acts including Iron & Wine, Jose Gonzalez and Rhian Sheehan. In 2013 they received Best Music Award at NZ Fringe Festival.
‘“…an old camera flash, standing like you’re Johnny Cash” shift this beyond folklore into a more off-beam world of the present re-imagining the past.’ Graeme Reid, The Herald 4.5 Stars
“Rosy Tin Teacaddy’s All Mountains Are Men is an impressive piece of work that finds this duo extending themselves beyond the ‘homefire’ folksiness of their first album and into a world of Kiwi gothic and folktronica in which the possibilities seem wide open”. Nick Bollinger, Radio NZ, National.
The Faustians
– are Helena Faust, Philip Muollo and Stephanie Cairns – building original music from a deep foundation of Traditional Appalachian Oldtime and weaving in Stephanie’s background as a fringe rock musician (Birdfeeder).
Helena began songwriting during her 10 years in West Virginia steeped in the local traditions and performing with the award winning band ‘The Raincrows. Back in NZ she formed the group Cotton Daisy Backstep [winners of the Wellington Folk Festival ‘Peoples Choice Award’] and began playing cafes, folk clubs, festivals, weddings and square dances around Wellington.
The Faustians were later formed in 2017 to provide a conduit for the growing number of originals. The songs are grim, foot-stomping and catchy, showing wit and wry humour, [but mostly grim]. Content ranges from farming accidents, madness, child ghosts, anti-gospel, anti fracking, lost chickens, and of course, mother.
The simpler structures, raw mountainy vocals and straight forward accompaniment show the power of the traditional roots, but now, in addition to the banjo, guitar and fiddle, there are new, modern sounds finding their way in as they experiment with edgy harmonies, synthesiser, percussion and more complex arrangements.
$15 at the door
+ Google Calendar+ iCal Export