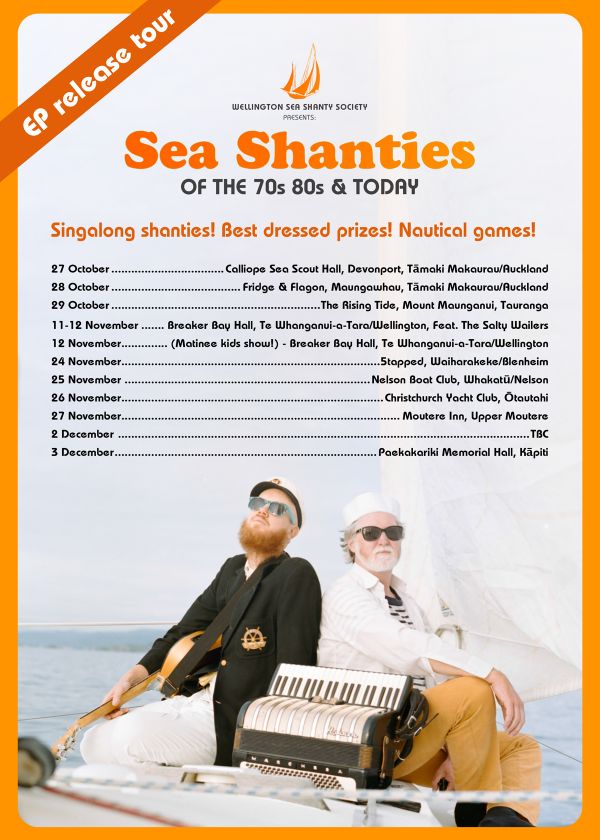 They say some things never leave us. They’re always there, just out of reach, between sleep and dreams. Between the foreshore and seabed. The plaintive moan of a bachelor seal. The treasure we never found. The life we never led.

But fear not sweet hearties – the Wellington Sea Shanty Society (WSSS) are back from exile with a swag bag of forgotten futures! Secrets given up by the sea in the form of ‘Sea Shanties of the 70’s, 80’s & Today!’ (their new EP).

These new shanties were committed to memory (human and digital) in the earthquake-prone bowels of an empty Wellington office block. A windswept shelf overlooking a dark harbour – what better place to prize joy from salty oblivion?

To celebrate the WSSS are inviting you to do just that – by bringing their lively singalong show to a whare or flophouse near you. There will also be a treasure hunt for handmade bounty by WSSS alumni and jewel-smith Su Keates, as well as a map by cartographer extraordinaire Sam Van Der Weerden.

If you’re from Te Whanganui-a-Tara, and you know your imaginary history, you’ll know the show at Breaker Bay Hall represents a return to hallowed ground. But then again, every show will be more thrilling than a gallon of grog and seeing the captain walk the plank!