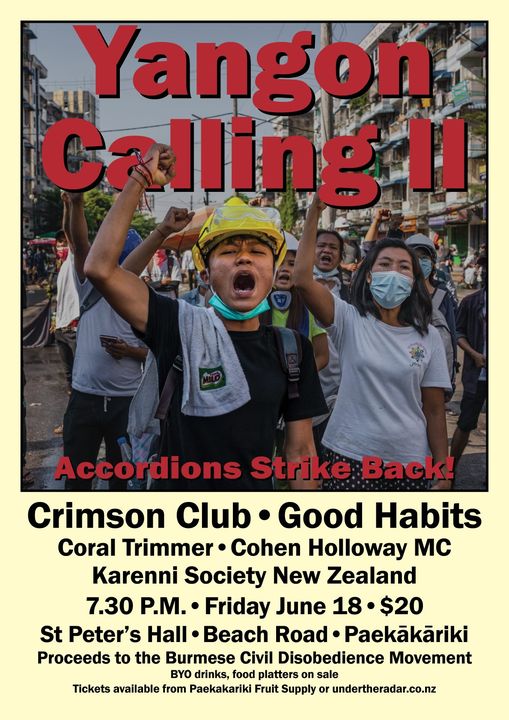 Tickets $20 from Paekākāriki Fruit Supply and Under the Radar
BUY TICKETS
Delicious food platters available for purchase, BYO drinks.
Come and help the courageous folks of Burma fight back against the military junta.
A group of Paekākāriki locals are coming together to raise funds for the people of Myanmar on June 18 at St Peter’s Hall in Paekākāriki.

MC’ed by Cohen Holloway, well-known actor and member of the Māori Sidesteps, the evening features performances and Burman-inspired food and follows a successful event held in April which raised $4000 for the cause.

Organiser Katie Julian, who is normally based in Myanmar/Burma,  says the event aims to raise awareness and funds, as well as provide an evening of excellent food and music.  “We were so pleased with the response to the last event, we aim to continue to allow people the chance to help the people in Myanmar, and support those who live here and are desperately worried about the situation at home.”

Paekākāriki comedy trio The Crimson Club will also perform, and 90-year-old virtuoso harmonica player Coral Trimmer will be joined by Paekākāriki pianist Gilbert Haisman.  In the early days Coral performed on stage in NZ with various entertainers such as Howard Morrison, regularly on NZ radio, and was NZ Television’s first live instrumental performer. A stellar career included an extensive War Office tour of the Middle East with the Stan Stennett Show.

Karenni cultural dancers will also perform and cultural tapas style food will be available for purchase.

Julian, a Kiwi normally based in Myanmar/Burma hasbrought together a group to organise events to raise funds and awareness of the situation in Myanmar.  “We’ve come together because the people of Myanmar are suffering intense deprivation due to the horrific military crackdown, and we feel compelled to do anything we can to help,” she says.

Joining Julian organising the event is Helen Keivom who is from the same tribe as the Burmese ethnic Chin, known as Mizo in North East India. “My home state and neighbouring ones are sheltering refugees from across the border despite opposition from India’ central government, so I have a close connection with the situation,” says Keivom.

Of Ngati Ranginui, Ngai te Rangi descent, Julian worked in Burma since 1995. She first lived and worked in camps along the Thai/Myanmar border with students who fled the had 1988 pro-democracy uprising, then in Mae Sot with a series of education organisations. She co-founded the Curriculum Project in 2001, supporting adult education projects for refugee, migrant and exile communities along Burma’s borders.

Since 2008 she has been based in Yangon/Rangoon. In 2013 she started working with Mote Oo Education, a community-based adult education initiative working with post-secondary and civil society programmes. She was back in Aotearoa on leave in early 2020 when Covid-19 struck, and has not been able to return to Burma since.