The Paekākāriki Seawall Design Group was formed around 8 years ago. The group was created by a number of local volunteers to advocate for the community regarding the replacement of the failing Paekākāriki seawall along The Parade. The aim was to ensure a good consultation process with all parties, and, at the time, to ensure no more rocks were placed on the beach.

Over the years our group came to play a key part in consultation with the council, helping to connect and consult with the community as well as to discuss and brainstorm various design ideas that could address those priorities (including budgetary priorities). Many hours of volunteer work were provided by our group to help in this process, some of it from subject matter experts who happened to live in the village. Throughout the process attention was of course paid to staying within the indicated budget and we worked closely with council staff and other consultants to discuss details and arrive at solutions that were affordable but also addressed the key concerns as much as possible. Council staff and consultants then put forward the agreed proposals which were approved by community and local council, drawn up and consented with the regional council and, we were assured, within the long term budget as estimated.

Overall, we have worked hard over many years to promote and reflect the Paekākāriki community’s vision for a seawall that is both functional and protective as well as able to make the best of our beach and its surroundings.

We understand the budgetary constraints in place for the council.

We support the need for a less expensive option, but we do not think the council should be hamstrung by the simplistic idea of a ‘like for like’ replacement.

We understand that budgetary constraints suggest replacing the now fraying timber sea wall with another wall built from similar materials – and we support this idea. But, even within the context of a timber wall, a lot of specific design concepts from the consented design can be used to significantly improve on the design of the timber sea wall that is already there.

Fortunately we already have a clear understanding of community priorities as well as a number of specific design concepts that could significantly improve on outcomes.  Many hundreds of thousands of dollars and hundreds of hours of volunteer work has been incurred in consulting and coming up with these design concepts.

We urge the council to think ahead when building a seawall. $17 million dollars is way too much money to spend without proper planning. We urge the council to crib extensively from the existing work that has already been done. It is true that design itself can cost money but, within a $17 million budget, improving on the current design may actually improve utility and actually cost less.

We advocate for a ‘design and build’ tendering process that allows for the very real possibility that smart local contractors may be able to deliver many of the key amenities desired for even less cost than the current $17 million estimate. By building in stages, risk of tendering can be reduced further.

Given that the council can reuse the outcomes documentation and design work already done as part of the consented design we urge the council to create a document outlining the key priorities and constraints of the current project, in the context of the consultation already completed, and then invite design and build tenders from interested local contractors.

We have reason to believe that local contractors, who are familiar with the conditions and materials available in our area may well have some very useful and interesting ideas. Properly incentivizing these people to provide suggestions on how to design and build the seawall in a cost effective way may save the council significant funds and at the same time support local businesses. This is especially important at a time when work related to the local motorway/s is starting to dry up.

We support the suggestion that the council might build the seawall in stages from the southern end north. While erosion protection is important across the whole length of our beach, the need is most pressing towards the south.

Many of the outcomes from the consultation are already documented, however we wish to draw attention to the following key points.

After much design work and discussion with experts it was determined that the key thing here is to avoid large lengths of vertical wall. Specifically, designs which start low and step back gradually are to be preferred.

There is a simple and critical reason for a stepped back design – the conservation of sand: 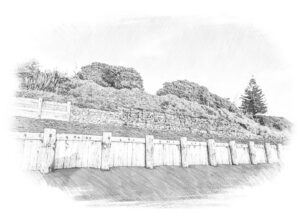 To preserve a sandy beach, the key thing to avoid is scouring of the sand through wave action. During a storm, waves slamming into a large vertical wall push down hard into the sand with equal force to the waves they throw into the air.

We have good reason to believe that scour from vertical walls is a problem wherever such walls are built; you can see this here in Paekākāriki as well as in the wider Kapiti area (and elsewhere).

Scouring of sand also destabilizes the wall and limits its useful life time.

On the other hand, low walls with stepped back designs are often associated with areas of the beach where sand is preserved.

Specifically we advocate, as a priority, a stepped back design that can minimise sand and beach loss. We urge the council to reduce the first seaward wall’s vertical height above the sand as much as possible and then step back in progressive stages from there.

However, rocks placed directly on the sandy beach become a problem in and of themselves. 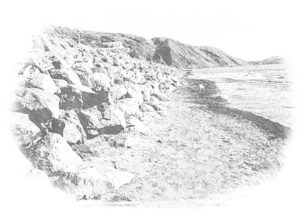 Specifically they push down the level of the beach, effectively reducing usable beach area versus high tide.  Worse, they slump down over time and get pulled out into the sea – thus eliminating the sandy beach that a stepped back design is trying to protect.

Placed correctly, however, rocks, boulders or rock revetments can create a very effective secondary wall, away from the sandy beach – a design which is cost effective and efficient at preventing erosion from bigger waves and storm events. Design sketches already presented by the council to the public during earlier consultation suggested the use of boulders as a secondary line of defence and we are in favor of rocks or boulders as an option in this role. 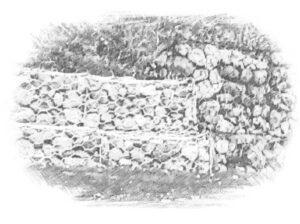 It is true that the cost of large boulders has gone up in recent years. However, perhaps when discussed with local contractors as part of a design/build process, gabions can be an effective way to reduce cost while retaining amenity, especially if coupled with plantings.

Easy access to and from the beach was another key point that came out as a clear priority during consultations.

The consented design had many specific access points marked in, and those locations were the result of some discussions and compromises on specifics with local residents. We hope that the new design can incorporate access to the beach at all the same points as already in the consented design. It’s also worth noting that with a low enough seaward wall the beach can be directly accessible to able bodied people (including children and pets) along the whole length of the seawall, and also avoid a fall hazard, as exists currently.

Another theme that arose in much of the consultation is that people really appreciate walking along the path directly above the seaward wall – as already exists at most points on the beach. Rather than walking right next to the road the preference is generally (though not always) for a lower path, or ”upper beach” – preferably with areas of seating – just above the sea wall.

The design group urges the council and other parties to make smart use of the horizontal space and reflect the values of our residents that prioritizes a walking path at a lower level.

We urge the council to pay close attention to the vegetation planted on and around the wall. Relative to the overall budget it is very cost effective to get proper advice on these matters and to ensure there are hardy plantings growing in soil that can grow around and onto the wall. Coupled with rocks above the lower sea wall, this can have the double benefit of being visually more attractive while making the secondary wall stronger and more resistant to being pulled into the sea during large storms.

Often it is the small things that make the most difference and another often requested feature is for there to be small nooks and crannies where it is possible to escape from the wind. Also there is a desire for occasional artistic features. The council could do this very cost effectively if they simply ask the local community, the local community board and perhaps the design group to help facilitate with such extra features.

The design group sees an urgent need to progress this project, but without losing the design features that 8 years of community consultation has given us.

We advocate for a design and build tendering process that allows for the very real possibility we might be able to deliver many of the key amenities even more affordably than the $17 million estimate. We also advocate for building in stages from south to north along our beach.

Whatever we do should incorporate the key features from the consultation done to date. Which include:-

The Paekākāriki Seawall Design Group looks forward to further consultation with KCDC to progress this project, with the ultimate aim of a design that is fit for purpose, financially viable and community approved.

Signed for, and on behalf of, the Paekākāriki Seawall Design Group,